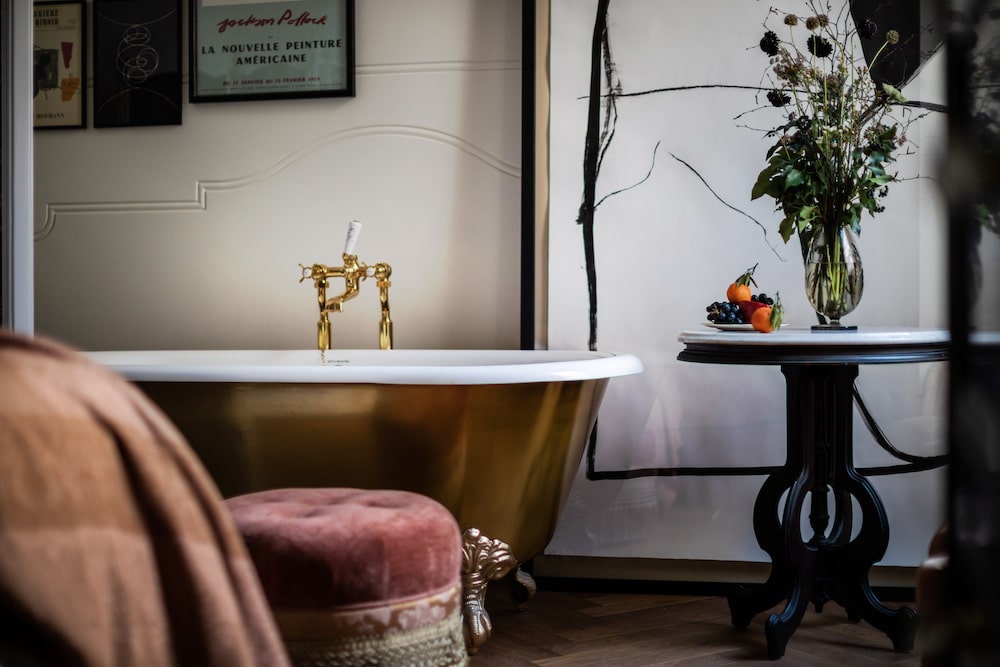 London is bouncing back with a flurry of new and recently opened hotels to get excited about. From design-driven boutiques to super luxe statement properties, there are plenty of places to inspire staycations and vacations in the capital. Here is a guide to the rooms worth booking…

In the heart of Covent Garden, opposite The Royal Opera House, NoMad London takes residence in the Grade II-listed building previously known as The Bow Street Magistrates’ Court and Police Station. This is the New York based hospitality brand Sydell Group’s most intimate property with 91 rooms centred around dining and drinking spaces. The NoMad Restaurant is housed in a lush, light-filled atrium evocative of an Edwardian greenhouse. Side Hustle is a British pub with a decidedly New York sensibility. A menu of sharing plates is paired with an agave-based list of spirits created by legendary mixologist Leo Robitschek. Head to The Library for a living room vibe;  coffee and cocktails are set amidst a thoughtful collection of books, thenomadhotel.com.

Following a major overhaul and complete redesign by award-winning London interior design studio, Goddard Littlefair Mondrian opened the doors of its Shoreditch residence. A chic and playful addition to East London’s creative and cultural hub, it is full of surprises. On the lower ground, is BIBO by world-famous chef Dani García. The Spanish kitchen serves tapas with courtyard seats, marking Garcia’s first restaurant in London. A new all-day café and cocktail bar Christina’s Shoreditch is the place to keep it casual. Look out for artistic pop-ups and live performances in The Screening Room, a private room and bar. There is even a co-working space and a rooftop pool and restaurant which is home to The Curtain Club; a fabulous spot for letting your hair down and soaking up the ambience. The food is sumptuous, cocktails are flowing and you can’t beat that City skyline backdrop, sbe.com.

It may not be the most recent opening but after launching just before the pandemic, Page8 deserves its moment in the spotlight. Overlooking the National Portrait Gallery, this Trafalgar Square hotel couldn’t be better located for travellers who want to be in the thick of the action. Its cool and calm interiors give it a slick urban retreat feel. Central to the hotel is Page Common, a communal space where collaboration is encouraged and accompanied by an excellent caffeine dose thanks to a partnership with Assembly Coffee. Freshly baked pastries and brunch are on the menu and there is an extensive events programme too, pagehotels.com.

After eight years and a £300 million investment, The Londoner is finally making its mark on Leicester Square. It’s a big number in every sense with 350 rooms designed by Yabu Pushelberg, six concept eateries, two private screening rooms, an expansive ballroom and a huge wellbeing floor with a pool, spa, nail and hair salon, a spa-bar and a gym. It calls itself ‘a super boutique hotel’ and lives up to its name, thelondoner.com.

A contemporary interpretation of a traditional guesthouse, this four-bedroom townhouse is on Number 6 Portobello Road in the centre of Notting Hill. Inspired by the needs of the modern discerning traveller, the ‘small is beautiful, hands-off’ approach offers guests access to this eclectic neighbourhood in a way they have never had before. The project comes from the team at Cubic Studios, a local property design studio, and is a poetic love letter to the area. Its creativity and dynamism come to life in its individually designed rooms and intimate welcome area, thelostpoet.co.uk.

The Carlton Tower Jumeirah in Knightsbridge recently splashed out on the most extensive transformation in its history at a cool £100 million. Every corner of the 17-storey building has been redesigned and rejuvenated. Guest rooms are by 1508 London who set about making rooms that felt airy and tranquil. Al Mare restaurant is serving up contemporary Italian cuisine. The renovations continue with an innovative new health club The Peak and new treatment rooms at the Talise Spa, set across three floors. The hotel will be the home of London’s largest indoor swimming pool, flooded with natural light and breathtaking views across the capital, jumeirah.com.

With wellbeing and sustainability at its heart, Inhabit is a young hotel brand on a mission to create restorative, environmentally and socially conscious places to stay in the city. Its first property on Southwick Street, Paddington opened in 2019, and its second London property is due to open nearby on Queen’s Gardens, Bayswater in March. Within a crescent of 19th century townhouses, there will be a wellness area with a Peloton bike, two GAIA treatment rooms and yoga studio on the lower ground floor. A tranquil library offers a quiet retreat on the ground floor, together with the plant-centric meat-free restaurant, inhabithotels.com.

A new hotel with an all-day public restaurant and a private members’ club, by Navid Mirtorabi and Jamie Reuben, will be opening on the historic Grosvenor Square in Mayfair this spring. Set within an Edwardian Manor at (you guessed it) number 22 Grosvenor Square, the interiors are led by award-winning luxury designer Natalia Miyar and her practice, based between London and Miami. Marking her first hotel project, each room and public space has been decorated in an opulent yet welcoming style. Think rich textured fabrics, elegantly embroidered silks, lavish velvets and bespoke wallpapers – a modern interpretation of classic maximalism. It pays homage to the grandeur and legacy of the building with original architectural features, including double height ceilings, restored within some of the guest bedrooms and suites, the22.london.

A new boutique lifestyle hotel opening in spring that promises to bring the cool and vibrant energy of Berlin to the heart of London. On Drury Lane, this new kid on the block is the first international destination from Berlin-based hotelier The AMANO Group which currently has eight hotels in Berlin, one in Munich and one in Düsseldorf. Proudly extrovert, the hotels are renowned for their distinctive design and immersive drinks and dining experiences. Formerly a 1980s office building known as Drury House, the hotel will also open a basement bar, restaurant, sky bar and rooftop terrace with DJs spinning music on weekends. Expect dark moody tones from Woods Bagot, the lead architect and interior designer behind the style, amanogroup.de.

Raffles London at The OWO

London’s first Raffles address is set to come to fruition late this year. Raffles London at The OWO will be a grand dame in the landmark Grade II-listed former Old War Office on Whitehall. The building once frequented by Britain’s most famous statesmen and spies, from Winston Churchill to Ian Fleming, will be open to the public for the first time having undergone a monumental transformation. It will comprise 120 rooms and suites alongside 85 unique branded residences, 11 restaurants and bars including a rooftop restaurant and bar with panoramic views across Whitehall, The Mall and on to Buckingham Palace as well as an extensive wellness space featuring world leading spa and fitness partners, raffles.com.

Combining home comforts and apartment-style living with hotel services, residents can stay for a day or a year at this new concept with properties in Covent Garden and South Kensington. Think hotel meets private members club. Kitted out with bold colours such as sage green and red, teal blue or perylene green, and layered with velvets, British tweed and wool, it is an eclectic mix of Vivienne Westwood meets Alexander McQueen, otherhouse.com.

One for the rock stars. Inspired by Denmark Street’s music heritage, Chateau Denmark “brings together creative expression and fine architectural detail to present something fierce,” according to its founders. This is a major undertaking just off Tottenham Court road. Spread across 16 buildings with session rooms, apartments and an underground gig venue this is going to be a mega new offering for central London, chateaudenmark.com.

This summer will see the long-anticipated opening of this independent luxury hotel. Details are under wraps but it will be the first London hotel designed by king of maximalism Martin Brudnizki who is responsible for Annabel’s, The Coral Room at The Bloomsbury and Sexy Fish. Expect cosy opulence with 57 bedrooms, broadwicksoho.com.

The North American stalwart which champions sustainability will debut its UK brand flagship in the heart of Mayfair overlooking Green Park. Alongside rooms across nine storeys, there will be a farm-to-table restaurant with garden seating and a bespoke fitness and wellness centre, 1hotels.com.