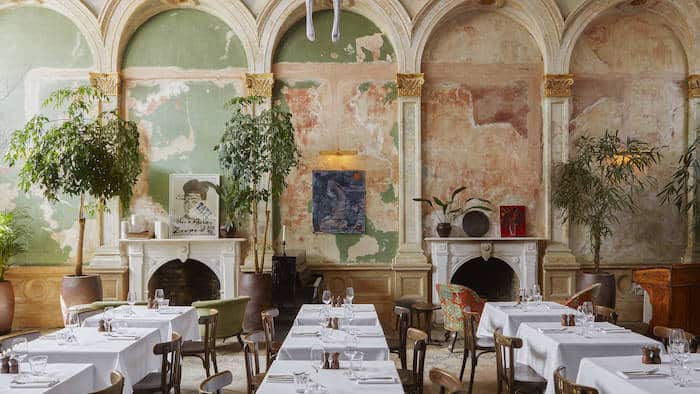 The thrill of revisiting old haunts for ‘the usual’ or discovering new places to wine and dine is still tangible after months of seemingly unending captivity. For me, it’s the snippets of conversations collected like appetisers as you weave through busy tables, the fragrance from the kitchen as a waiter guides you towards your table. It’s the sumptuous seats and the low, romantic lighting, the anticipation of each course and the decadence of physical (and cerebral) fullness.

In celebration of the simple pleasure of dining anywhere other than your own dining table, here is a round-up of some of the most exciting new restaurants on the UK’s booming scene.

New from the Japan Centre Group is the second in its Yokocho chain, located on Panton Street, a bustling nook in London’s West End. Its name translates to the English ‘alleyway’ and references Japan’s famously narrow streets furnished with lively izakayas. Yokocho serves traditional Japanese regional ramen cuisine, which originates from Hokkaido, the northernmost of Japan’s islands, to Kyushu in the south.

Vegetarian pillar of the vegetarian and vegan restauranteur community, Mildreds, has just opened Mallow, a brand new outpost marking its 25 year anniversary. Installed at the iconic foodie scene, Borough Market, a spokesperson has told visitors to expect an “extension of the market” with a mix of small and large plates of global inspiration, from cauliflower chaat to banana blossom tacos and truffle croquettes.

This year, Syrian Chef and restauranteur, Imad Alarban opened the doors to his eponymous Kingly Court restaurant to share the tastes and fragrances of Damascus. His journey to success on the London scene begins with his three restaurants, several juice bars and cafes in his home country’s capital which were destroyed within six days in the war. As he travelled across Europe in 2015, he cooked for groups of up to 400 refugees at a time. Arriving in Europe, his charity events have raised thousands for the Choose Love charity in aid of refugees, and the new restaurant will follow suit with donations of £1 from every bill.

Moving away from the churn of Carnaby and the restlessness of Soho, Edinburgh’s restaurant scene is positively blossoming. Roberta Hall-McCarron, the owner and chef at The Little Chartroom, a restaurant inspired by Hall-McCarron’s childhood, is set to open the doors to its latest outpost, Eleanore, a restaurant and wine bar for an informal, counter-culture approach to excellent Scottish cuisine.

Sessions Arts Club is a hub for lovers of the arts and great food in a beautiful setting in Clerkenwell. The setting is Old Sessions House, fully restored with its Grade II listing intact. The venue’s concept is grounded in the use of the space as a studio, acting as a restaurant under Florence Knight, a bar and a performance space.

A stone’s throw from the entrancing passages of The Lanes, Razak Helalat’s latest venture, Burnt Orange, is the place to wrap up your day trip to the UK’s most popular coastal town. Helalat is the restauranteur behind The Salt Room and The Coal Shed, two hugely popular settings for refined and formal dining experiences. With Burnt Orange, guests can enjoy Helalat’s more casual approach as he mixes the artful food for which he has become known with DJ sets from Norman Cook aka Fatboy Slim.