As every self-respecting cocktail connoisseur knows, 2019 marks 100 years of what’s possibly the world’s most popular cocktail – the Negroni.

This Sunday is also coincidentally World Bartender Day, so to celebrate, we wanted to introduce you to some of our favourite bartenders from around the BBB family and share with you the recipes for their favourite tipples….

It’s Friday night and the weekend approaches, why not see how many of these you can make this weekend?!

Bar manager Francesco Orefici has previously worked at the Ritz Club and One Lombard Street. Francesco has created a special Oscars Negroni cocktail, the ‘Shallow Negroni,’ inspired by the hit movie musical ‘A Star Is Born’ and taking its name from the Oscar nominated love song featured in the film.

This variation of the cocktail takes influence from the Negroni Sbagliato cocktail, first created in 1972, deemed the most romantic with its vibrant red colouring and use of Champagne, providing that bitter-sweet taste.

Pour the Campari and sweet vermouth into a mixing glass filled up with ice cubes.

Stir the cocktail with a long bar spoon( mixing spoon).

Using a cocktail strainer poor the chilled liquid into a rock glass full of ice cubes (or ice chunk if you have it).

Top up with champagne, give a last stir before squeezing the orange peel over the cocktail.

Twist the orange peel and let it drop into the glass….

Lech Silkovski first joined Gleneagles at the end of 2017 and has spent the last 7 months mastering The Century Bar cocktails – including signature cocktail the ‘Smoking Gun’. The Century Bar, refurbished by David Collins in 2016 is the beating heart of Gleneagles. Featuring approximately 170 single malts, this atmospheric space is the perfect spot to relax, unwind and sample some of Scotland’s greatest whiskies.

The ingredients are batched up ahead of time and chilled before being poured into a shotgun shell style flask.

Served on a board with glass and line of cordite/gunpowder which is lit to add a sulphurous note.

The American Bar at The Stafford, London – Benoit Provost

Benoit joined The Stafford in 1993, planning to stay a year to improve his English, but proved to be so popular that he never left. He became Bar Manager in 1997, replacing the late and beloved Charles, who, having served for 42 years at The Stafford, would be proud to see the high standards and buoyant atmosphere of the bar still going strong. Benoit is the utmost professional but sees his work as pure pleasure, relishing interaction with guests and building up close friendships with many regulars.

He says: “We see the same guests returning year after year. It’s so lovely meeting their families, watching their children grow up…I know they feel like they’re coming home when they visit us.”

Pour into a couple glass and top with champagne

Garnish with a sprig of rosemary

No 23 Cocktail Bar at The Merrion, Dublin – Martin Pramuka

Martin is from Slovakia and got into bartending at a fairly young age. He saw the hit 80’s movie ‘Cocktail’ with Tom Cruise when he was 14 years old and knew then that he wanted to be a professional bartender. He moved to London at 18, where he learned the trade from working in a number of different places including The Beaumont Hotel and Mandarin Oriental Hyde Park.

He says the place that had the most influence on me as a bartender, and for someone who loves everything to do with cocktails and beverage, would be The American Bar at The Savoy.

Pre-batch/ Infuse the gin with tea for approx. 2 min.

Then add the other ingredients and stir in the mixing glass to dilute.

Strain and serve over crushed ice. 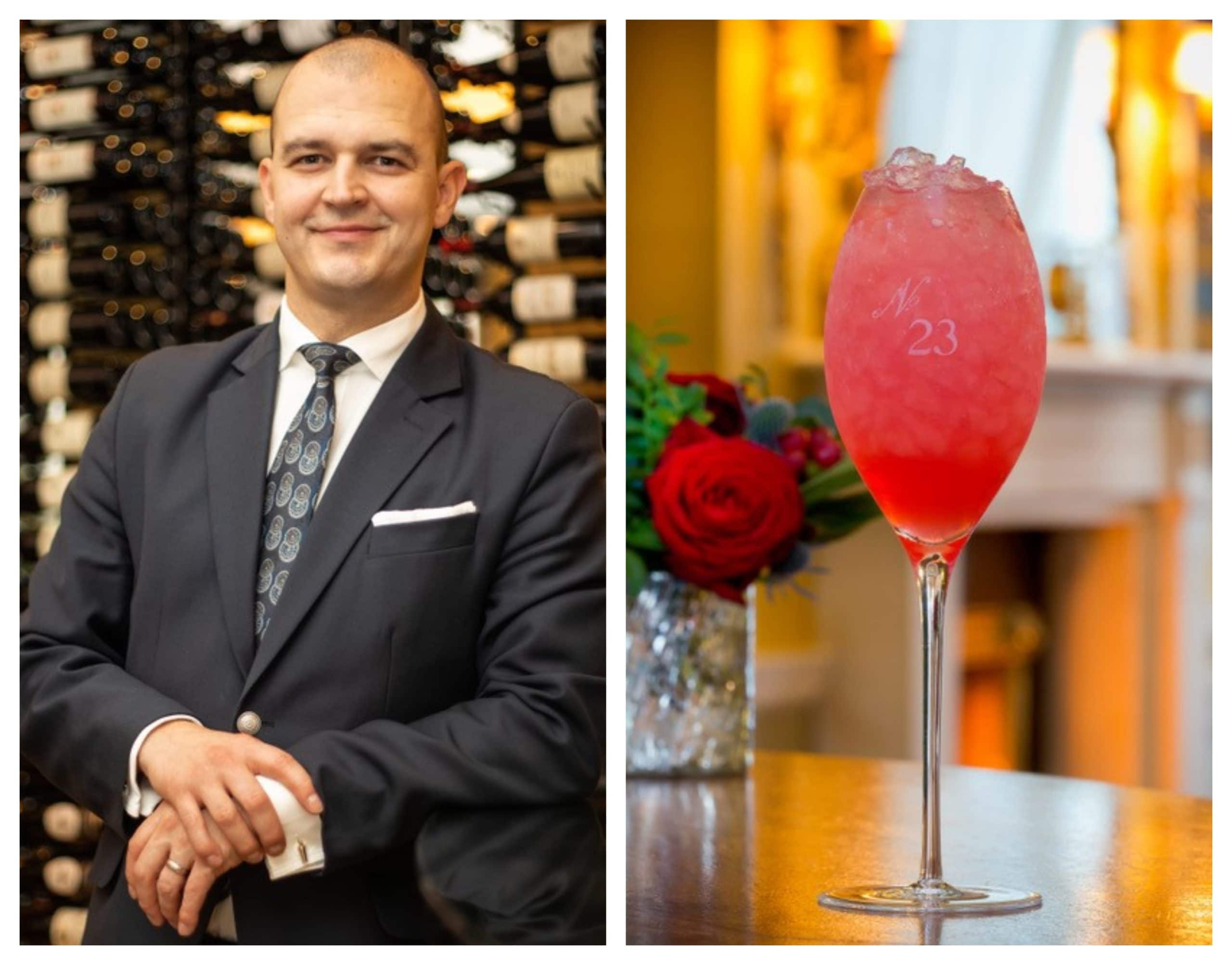 Roberto has worked at Nobu Shoreditch since the opening in 2017. He has developed a great sense of hospitality and passion for Japanese culture. The Nobu Bar celebrates Nobu Matsuhisa’s ‘East meets West’ philosophy. They are the only bar to sell premium Hokusetsu Sakes available in the UK. Hokusetsu have been making sake for more than 140 years and has exclusively supplied Nobu restaurants across the world for over three decades.

Stirred and smoked in Japanese Cypress.

Served on ice with citrus twist and cherry Morello. 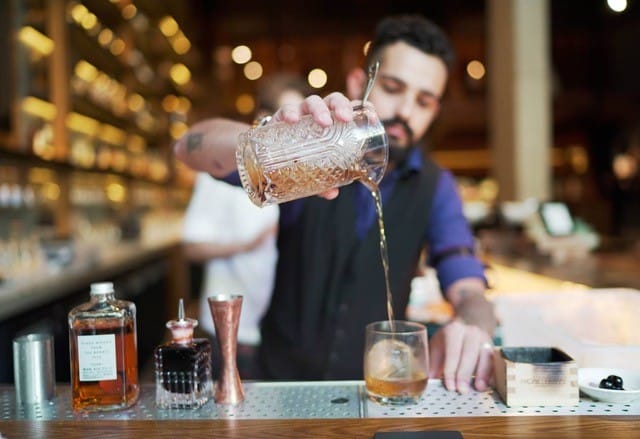 Osmar is Brazilian, 24 years old and has been a bartender for over 6 years. His favourite cocktail is the Old Fashioned. 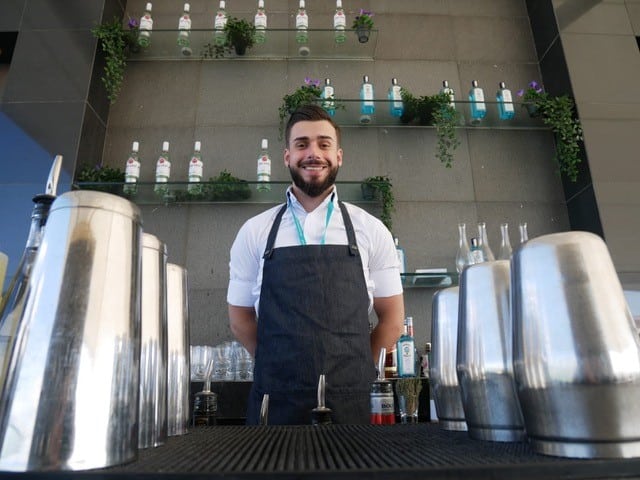 “I began here in 1978 as second Bartender and received a promotion to Head Bartender in 1989. I express my art in the marvellous venue of the Gabbiano Bar at Belmond Hotel Cipriani. I arrived in Venice as a young man after several work experiences around the world. I found Venice to be my true school: I met great masters from whom I learned all that this job has to offer, and demanding clients who, day after day, helped me better understand their desires and ultimately succeed in making them feel at home. When I am face to face with a client, I try to divide my soul in two, in an attempt to identify with them; my goal is to perceive what they feel and then translate those emotions into something that may satisfy them.

I am of the opinion that what makes a perfect bartender is the ability to convey your passion and offer a welcoming atmosphere to your guests, something that at Cipriani I always commit to do.

I love my job, and this is my philosophy: a Martini Cocktail is technically always the same, but I believe that it undergoes continuous evolution, dictated by the heart. Depending on who is sitting before me, or the moment when a cocktail is requested, I pour my emotions in a blend of tastes, perfumes and colours that gloriously end up in a Martini or a crystal flute.”

And a little story….

CLOONEY AND HIS CASAMIGOS

It was 3 o’clock in the morning and George Clooney was at the Gabbiano Bar. Noticing that the staff was in need of energy after long hours of work, he came behind the bar, took the shaker and filled it with ice and his Casamigos tequila. He started shaking the cocktail and then poured it into all the glasses that he offered to us to recharge: much appreciated and exceptionally prepared.

Put crushed ice inside the glass.

As decoration use currant, cucumber peel and lime (see pic)

Serve with a short straw

If you’d like to book in and stay at any of these wonderful establishments, to escape for a night or 2 and possibly drink a cocktail or two made just for you by these master craftsmen, just contact Anna at anna@thebbbook.com discuss dates and special BBB deals.